Jane Burton graduated from UC Davis in the late 70's with a BFA, studying under Wayne Thiebaud, Roy DeForest and Robert Arneson. She continued with graduate school and a career in Graphic Design. It was much later that her passion for ceramics and sculpture was reignited, inspired by a trip to Abiquiu, New Mexico where Burton worked with Native American potters.

Since then she has studied with Susannah Israel, Andrée Thompson, Stephen DeStaebler, and Robert Brady. Burton was offered her first solo show four years later at the Bedford Gallery in Walnut Creek, CA where she featured a twenty-foot pitfired ceramic figure. 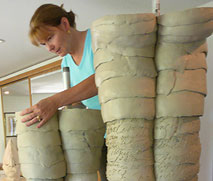 "On much of my work I write stories, poetry or journal writings. Many of the writings reflect on the perceptions we develop about who we are, about the importance we put on "surface things", our clothes, our looks, our money, and how they can define, and at times trap us."